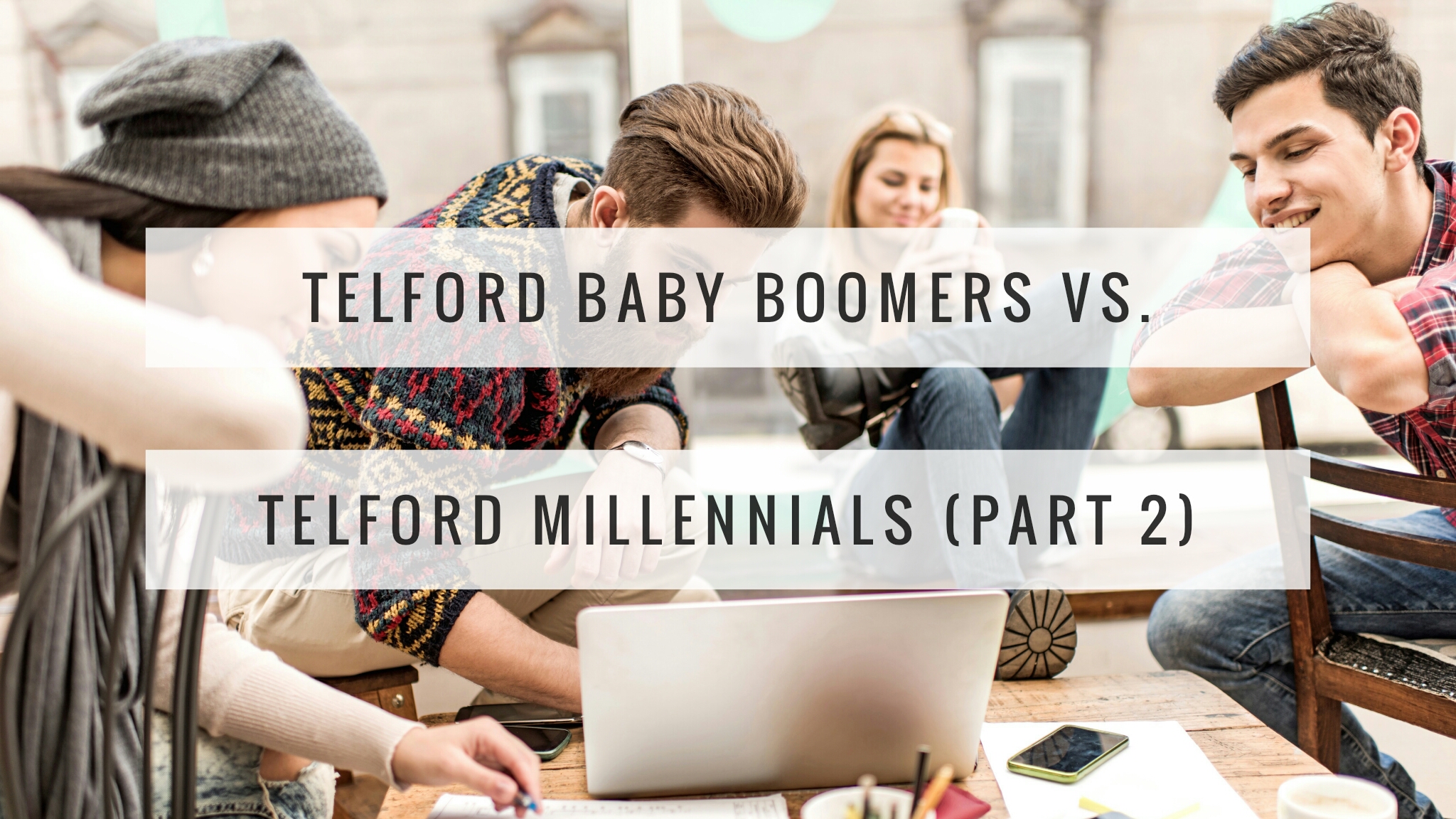 0
Well last week’s article “The Discussion of the Telford Baby Boomer’s £3,468,900,000 windfall?” caused a stir. In it we looked at a young family member of mine who was arguing the case that Millennials (those born after 1985) were suffering on the back of the older generation in Telford. They claimed the older generation had seen the benefit of the cumulative value of Telford properties significantly increasing over the last 25/30 years (which I calculated at  £3.47 since 1990). In addition many of the older generation (the baby boomers) had fantastic pensions, which meant the younger generation were priced out of the Telford housing market.
I replied there should be no surprise though that the older members of our society hold considerably more of our country’s wealth than the younger generation. This wealth is accrued and saved across someone’s life, and reaches it’s peak about the time of retirement. If we are to comprehend differing wealth levels between generations we need to compare ‘apples with apples’. It is much more important to track the wealth held by different generations at the same age, i.e. what was ‘real’ wealth of the 30-something couple in the 1960’s compared to a 30-something couple say in the 1980’s or 2010’s?
Looking back over the last 120 years at various economic studies, this growth in wealth from one generation to the next (at the age range), only happened over a 30 year period of between 1960 and late 1980’s. Since the 1990’s, wealth has not improved across the generations, in the same age range.
So could it be all about these people saving? The fact is, in the last 10 years, UK households have saved on average 7.5% to 8% of the household income into savings accounts, compared to an average of 6% to 7% in the late 1960’s and 1970’s. The baby boomers haven’t been actively squirreling away their cash for the last 30 or 40 years in savings accounts to accumulate their wealth. Most of their gains have been passive, lucky bonuses gained on the back of things out of their control (unanticipated and massive property value rises or people living longer making final salary pensions more valuable) – it’s not their fault!
…and herein lies the issue … it is assumed that these Millennials aren’t buying property in the same numbers like the older generation did in the past (because most of their wealth has come from house price inflation). The Millennials have often been described as ‘Generation Rent’, because they rent as opposed to buying property – because we are told they cant buy.
However, when Telford mortgage payments are measured against monthly income, home ownership is affordable by historic standards because mortgage rates are currently so low. As you can see, the ratio of average house price to average earnings in Telford hasn’t vastly changed over the last decade …

(i.e. in 2008, the average house price in Telford was 5.88 times more than the average person’s salary in Telford and this has dropped to 5.78 in 2017 – and all this off the property boom of the early 2010’s)
95% first-time buyer mortgages were reintroduced in 2010. The average interest rate charged for those 95% FTB mortgages has slowly dropped from around 5.5% in 2009 to the current 4% rate. Back in the 1980’s/1990’s mortgage interest rates were between 8% and 10%, and one time in the early 1990’s, reached 15%! The main difference between the two periods was the absolute borrowing relative to income is greater now than in the 1980’s. They call this the ‘mortgage to joint household income ratio’. In the 1980’s the mortgage was between 1.8x to 2x joint income; today it is 3.4x to 3.6x salary.
The simple fact is, in the majority of cases, it is still cheaper for a first-time buyer to buy a property with a 95% mortgage, than it is rent it. The barrier for these Millennials, has to be finding the 5% mortgage deposit – instead of being able to afford monthly mortgage outgoings at the current 95% mortgage rates?
Millennials make up 11,556 households in the Telford and Wrekin Borough Council area (or 17.3% of all households in the area).  However, behind the doom and gloom, surprisingly, 35.02% did save up the 5% deposit and do in fact own their own home (that surprised you didn’t it!)
Nonetheless, the majority of Millennials in the area still do rent from a landlord (4,772 Millennial households to be exact). Yet, they have a choice. Buckle down and do what their parents did and go without the nice things in life for a couple of years (i.e. the holidays, out on the town two times a week, the annual upgraded mobile phones, the £100 a month Satellite packages) and save for a 5% mortgage deposit … or live in a lovely rented house or apartment (because they are nowadays), without any maintenance bills and live a life with no intention of buying (because renting doesn’t have a stigma anymore like it did in the 1960’s/70’s (secretly hoping their parents don’t spend all their inheritance so they can buy a property later in life – like they do in central Europe).
Neither decision is right or wrong – although it is still a choice. Until Millennials decide to change their choices – that is the reason why the country’s private rental sector will continue to grow for the next 30 years – meaning happy tenants and happy landlords.